Back to all Articles

Any given Sunday in the fall, Bob will be in a green and gold paradise: Lambeau Field, home of the Green Bay Packers.  Like most people in Wisconsin, Bob grew up watching the Packers, cheering for one of the oldest sports franchises in the National Football League.

Fifty years ago, the first ever Super Bowl was played; a match between Bob’s beloved Green Bay Packers and the Kansas City Chiefs.  The Packers won, 35 to 10, led by legendary coach Vince Lombardi, the namesake of today’s Super Bowl trophy.

During his 26-year career at Sargento, Bob has harnessed his love for the Packers into a partnership with the team.  Because of Bob, Sargento is the Official Cheese of the Green Bay Packers. 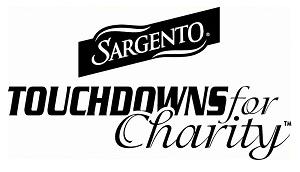 For the past 14 football seasons, every time the Packers score a touchdown, Sargento donates $1,000 to the Hunger Task Force in Milwaukee and $500 to Paul's Pantry in Green Bay. This partnership has allowed us to donate more than $1 million to hunger relief in Wisconsin through our Touchdowns for Charity™ program.